The Kenilworth Chess Club held its Third Annual Consultation Game beginning May 15, 2008. About 20 players participated, with 10 per team. The White pieces were directed by FM Steve Stoyko and a number of other players, including myself, Max Sherer, and Greg Tomkovich. The Black pieces were directed by NM Mark Kernighan and NM Scott Massey along with Mark Bilenky, John Moldovan, Joe Demetrick, Mike Wojcio and a number of other players. As I only witnessed the White side, my notes mostly reflect that side of the board. Interestingly, the opening was similar to that played in a number of John Moldovan's games, as discussed on his "Chess Coroner" blog -- including a recent one against Max Sherer (who is studying with Stoyko). Some of the notes below are drawn from Moldovan's remarks on his own games with the line. 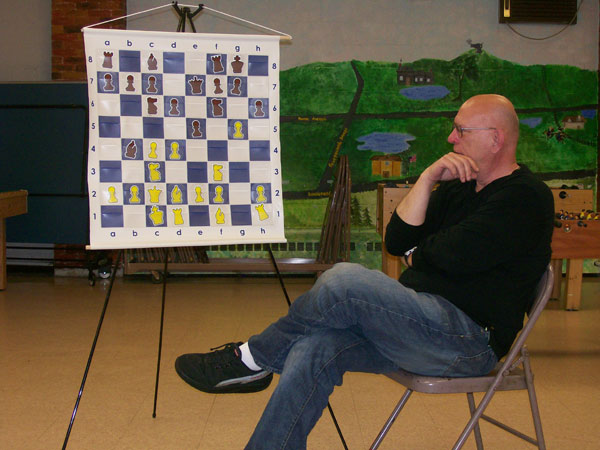 While FM Stoyko moved the pieces on the demo board and led the discussion for the White side (see image above), he was remarkably hands-off in dictating the course of play, even allowing us to pursue a rather wild line (with an early g4 advance) which he disapproved -- saying "I would never play this, but it's reasonable."

The game will be finished next week.

Black has other moves which may be better:

Stoyko did not want to dictate the course of play but just keep us within reasonable bounds with his advice. He thought the plan of O-O-O followed by a speedy kingside advance was fully justified by Black's early h6. But, in his view, there was no need to rush things. Better to first secure the two Bishops (with a3), lock things up, and then slowly advance on the kingside, when Black's counterplay would be limited, especially since all endgames favor White's Bishops. A good example of Stoyko's preferred strategy might be the following game:

Steve thought this move was a bit reckless and premature, but it was the fan favorite and I led the cheers for it. Obviously, White is spurred on by ...h6 and the opposite side castled position to start an attack.

gives White plenty of initiative for the pawn.

We thought that this move, giving up the center and exposing the Knight at f6 to exchange, was wrong.

Now all of White's forces are active.

We had a very tough time deciding between this and 18. Qc2

with the much better ending for White due to his outside passed pawn, good Rook placement, and excellent squares for his Knight. But we refused to believe that exchanging into an ending with equal material was White's best. We still wanted to attack.

Playing quickly due to the 60 minutes per side limit, we overlooked this shot. During the game, we felt that Black completely steals the initiative after this, but a closer look suggests that White is still much better.

which may well be winning.


and in this position Black sealed a move. White is up the Exchange and has an outside passed pawn, but it is a very tough ending to win. I look forward to seeing how White tries to make progress. 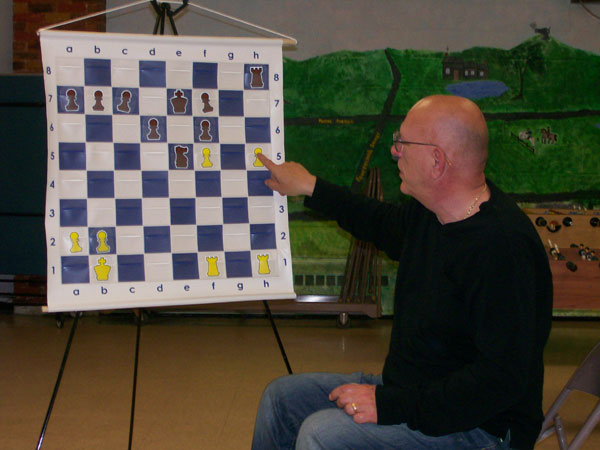