Later this weekend I'll post an analysis of a game I played at last year's US Amateur Team East.  It was a game where I had Black against a master who needed to win to bring his team a win in the match, and though I came under heavy pressure I managed to walk away with a draw.  This game to me was a sign that convinced me that I was on the road to improvement (in contrast to say last night's steaming turd loss to Mike Wojcio which is like a Wrong Way sign).  I thought I'd toss out memorable games as a topic for the assembled readership - please post some, it can help push John's exegesis on spam further down.
P.S.  Bill, I remembered to bring the magic poison last night, and you weren't there, imagine the disappointment!
posted by Ian  # 5:21 PM 1 Comments Links to this post

I found out why my Chess Coroner blog is locked. Blogger's bots think it's a spam blog. Click the images to enlarge & read. 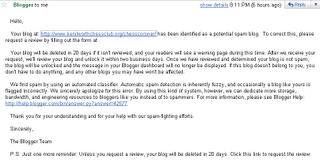 P.S. - For under 40 crowd, the title refers to this Monty Python skit :

Some SOB Locked My Blog. So I'm posting here!!

While I was attemping to publish Chess Coroner post #526, my blog was locked for a possible terms of service violation. Until that lock is lifted, I will be posting here.
posted by Chess Coroner  # 6:09 PM 1 Comments Links to this post

Don was kind enough to pass on a game he played last week against Max in the summer tournament.  Sitting at the adjacent board I quickly became fascinated with this tense game, and the analysis afterward was not easy, even with resident NM Mark Kernighan doing color commentary.   Don came up short defending against the Isolated Queen's Pawn, and it's interesting to see how quickly things turned against him from a mostly level position.  Mostly human commentary here, but I'll let the computer jump in for the tactical strikes.
1. d4 d5 2. c4 dxc4 3. e3 Nf6 4. Bxc4 e6 5. Nf3 c5 6. O-O Nc6 7. Nc3 cxd4 8. exd4  (Max, like his mentor, does not fear the IQP) 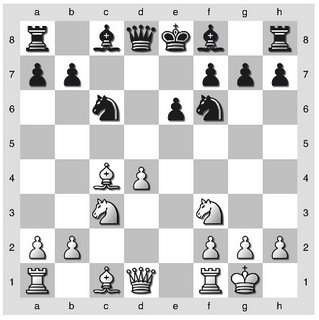 So it's Black to move in this apparently common position (45 positions in my 2nd grade level database).  White has the isolated pawn, but open lines and outposts for his pieces, etc, etc.  My computer says +0.38 in case that matters, sounds reasonable to me.  Don took in inordinate amount of time on his next move (12-20 minutes or so out of 60), and came up with what is the book move:
8.....Be7, after which 9. Bg5 O-O 10. Re1 gets us to: 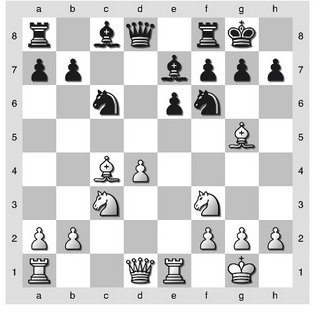 All the same, this is standard material.  But Don had used even more of his clock, having been burdened ironically by having read an excellent book on the IQP, Winning Pawn Structures.  The book does such a good job detailing the concrete, tactical nature of IQP positions that Don felt compelled to find the exact move on each turn, which is a difficult task to say the least.   Not having memorized exact lines, Don starts to go wrong on this move.  Meanwhile, I suspect Max is in his element in this position.
10 .....Nb4?!   Here theory prefers 10....a6 or 10....b6, getting the light-squared bishop geared toward d5.  The Nb4-d5 idea isn't bad yet, but the bishop never really gets in the game in what follows (compare with Keene-Miles posted earlier).
11. a3 Nbd5 12. Bb3 Bd7 13. Ne5 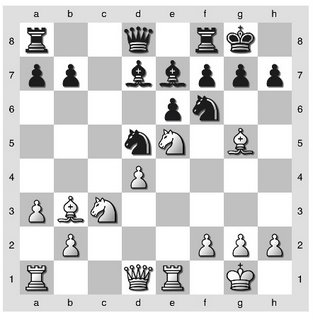 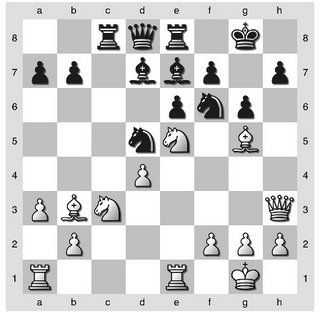