Even a stopped clock gives the right time twice a day

As promised, it's time to look at Mangion-Leverich, the game I played at the Hamilton Quads that I felt was one of the better games I've played in some time (though my recent hiding at the hands of our resident Lord of Darkness Mark Kernighan reminds me that one good game does not a good player make).  Today's presentation is enhanced with multimedia add-ons, courtesy of Steve Ferrero (picture) and USCF (testament of glory).
1. e4 c5  2. Nf3 d6  3. d4 PxP  4. NxP Nf6  5. Nc3 a6
Side note: Conventional as the Najdorf may seem given its popularity at the club level, I've never fully understood its appeal.  For the counterattacking riverboat gambler, yes, but many other seem attracted to this move order.  In the Sicilian so much hinges on the strength of White's kingside attack, so to play ...a6 so early is no less a provocation to White than a fork in the eye.  In blitz games I usually play quietly against it, but in long games I have tended to favor 6. Bg5 and try to start raining perdition on the g- and h-files.  In this case, I had played that against my opponent in an earlier game and wanted to change things up.
6. Be2 e5  7. Nb3 Be7  8. Bg5  Probably better played on move 6
- I was mixing plans with vaguely remembered Sveshnikov moves
8. .... Nbd7  9. a4?! (commits against O-O-O)
9. ....  O-O  10. Qd2 b6  11. O-O Bb7 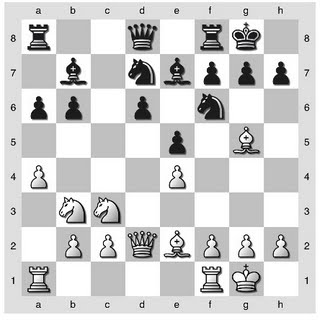 White has a comfortable position, but the original plan of playing for Sveshnikov-like control of d5 doesn't fully work here because ...Nbd7 has supported the key knight at Nf6.  Meanwhile the e4 pawn needs protection, and I need a strategy on how to improve the position.  I thought for several minutes here and decided to try if possible to attack Black's b6 pawn which looked a little shaky.
The author contemplates playing 12. f3 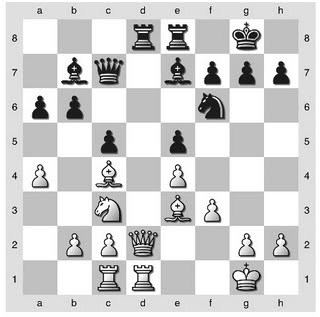 With an open file and a somewhat symmetrical pawn structure, Black should be able to get a draw with good play.  However, White's minor pieces are slightly better and they have access to an excellent outpost on d5.  I wish I had remembered Nimzowitsch's concept of a strong outpost acting as a fulcrum around which all your pieces can pass through and gain strength by their contact with it.  As it is, I made adequate use of this idea as the game progressed.  Off topic, if you ever wonder why the initiative is so important in chess, look at the remainder of this game and try to visualize Black's problems over the board - he has weaknesses to defend and (slightly) poorer mobility.  This defense requires modest precision, whereas for White to get a draw requires only offering it.  This would be a dead draw for high-class players, but for us patzers when one side has most of the winning chances he will often convert.
18. Qe2 Qc8  19. RxR RxR
I decided to try to accentuate the superiority of my minor pieces through rook exchanges.
20. Rd1 RxR?! (Why help me out?)  21. Qxd1 h6
Now white can add the d-file to his short list of assets.
22. Kf2 Nh5?!  (hands me the d5 square)  23. Nd5! Bd8 +=
Now the b6 pawn needs to be protected, as 23...Bxd5 24. Qxd5 looks grim 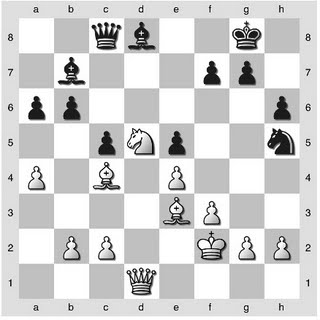 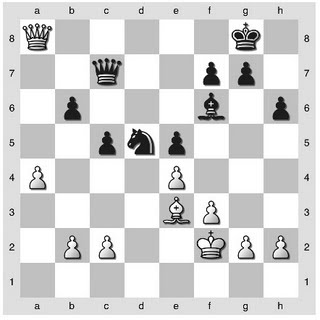 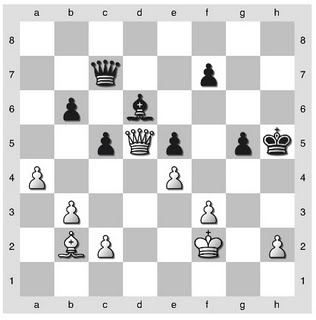 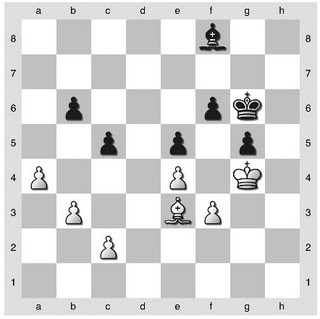 And here Black resigned.  Surprised?  Black has absolutely no way of dealing with the combined threats of b4 leading to a passer on the a-file and the weakness of his pawns on the kingside - White's bishop will be able to attack both but Black's bishop will only be able to defend one.  An example of the good bishop against the bad bishop.  This is the game that finally got me above a 1900 rating (evidence below), hopefully better is yet to come. 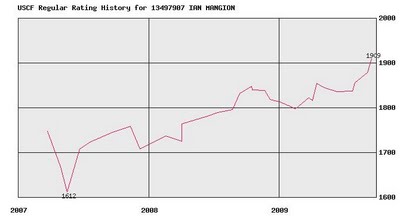 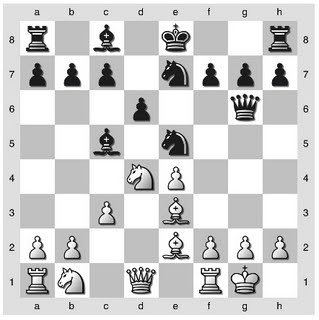 A very common position in which Black is already threatening ...Bh3.  So a typical move from white would be 10. f3, allowing defense of g2 along the second rank.  Carlsen, however, goes in for more dynamic play.
10. f4!? Qxe4     Carlsen goes in for an enterprising gambit, an interesting psychological choice given his opponent.  Leko is known for his incredible solidity and he was undoubtedly looking forward to a quiet game after 10. f3.  As he is unlikely to have prepared for 10. f4!? it must have been an unwelcome surprise, since the best move on the board is to accept the gambit with 10 ... Qxe4.  Otherwise White's pawn center would quickly dominate.  But now play takes on a different character, with White's pawn deficit being compensated by open lines and a lead in development, a classic imbalance.
11. Bf2  Bxd4  12. cxd4 N5g6  13. g3 O-O  14. Nc3 Qf5   White's light-squared weaknesses do not make a positive impression, yet his next move points out his trump, the weak nature of Black's Queenside.
15. d5 a6 (prevents Nb5) 16. Re1 Kh8  17. Rc1 Bd7  18. Bf3 Rac8  19. Qb3 b5?!  This seems overly committal...with b6 Black stays more compact and has better defensive opportunities.  Now a6 is also a target. 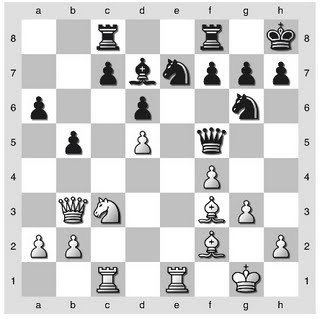 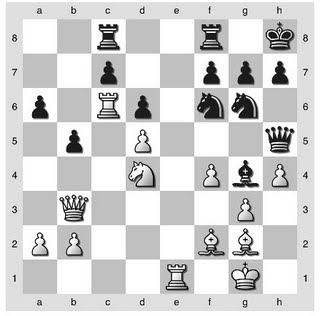 Take a look at this endgame and see if you can find a way for White to survive.  The solution is in the comments. 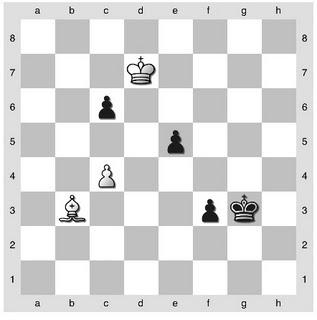 I made my twice yearly pilgrimage to the mecca of long time control, low stakes chess - the Hamilton quads.  It's an interesting place...nowhere else can you really find people who are so purely into the game.  The entry fee is $10 and the most you can win is $25 (minus entry fee and gas and a lollipop and you can count on being in the hole).  Meanwhile, 40/80, 15/30, 15/30 etc etc time controls means that the higher rated quads are battling from morning until, well, midnight sometimes.  There are even adjournments, a strange anachronism in a time when cell phones can be practically master strength on their own.
Typically I do much better with the slow time controls, so I decided it was worth another visit.  And as occasionally happens, it paid off handsomely - I finished +2 -0 =1 to win my quad, and more importantly should raise my rating above 1900 for the first time ever.  This was my big goal for 2009, and until recently it seemed a bit out of reach.  After reaching nearly 1850 while on a hot streak almost a year ago I regressed to the mean a little bit, and then found improvement hard to come by.  But when it rains it pours, and in the last two months I went on my best run going +6 -0 =5 against an average 1820-rated opponent.  That means that I'm back on track to win my bet with Don to become an expert, the prize for which is $1000 and dinner at Peter Luger's steakhouse in Brooklyn (right, Don?).
Sometime later I will post bits of my best game from this weekend's quad, but before I do that I'll spend some time focusing on things I've neglected recently, like my garden and my actual job (sigh).
posted by Ian  # 10:02 AM 2 Comments Links to this post

In the last round of the U1900 section of the NJ State Championship, there was one person with 4.5 points/5 (who I ended up playing at 4/5) and two others with 4/5, as well as a passel of people at 3.5/5.  Consequently, people were
playing for wins up and down the board
s, since 4.5 points could be expected to be worth anywhere from $50-120 while 5 points might be enough for first place.  My game ended in a draw after a few hours of tough fighting, leaving the 4 vs 4 matchup the lone remaining game in the section, playing for all the marbles (well, $400).
Earlier in this game, White had offered a draw from a better position and Black declined....true battle!  I left the board, came back and saw the following position... 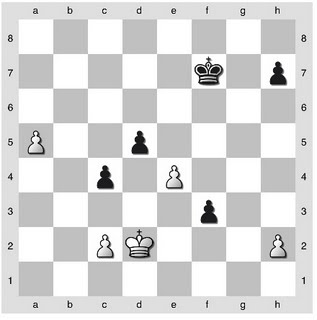 Here Black played  1. .... d4!    Clearly, taking the pawn on f4 is suicidal because the a-pawn can march while the White king covers the passed pawns.  Nevertheless, at first lazy glance I thought White was winning - after all, he has a passed pawn that can't be caught.  On noticing White's discomfort, I looked more closely and saw that the opposite was true... the straightforward line is 2. a6  c3!  3. Kd3  f2  4. Ke2 d3+!  5. Kxf2 dxc2 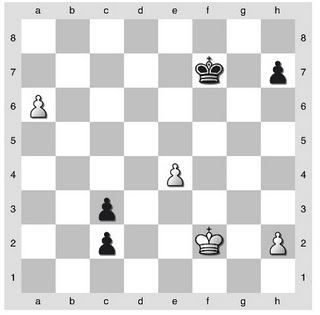 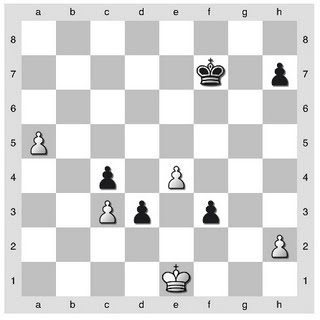 And White wins.   Sic transit gloria New Jersey.
Odd fact:  White, rated about 1680, got steamrolled by yours truly in the first round and responded by winning his next 5 in a row in a tournament-of-a-lifetime performance to get a share of 1st.  Crazy stuff, hats off to him.
posted by Ian  # 7:09 PM 0 Comments Links to this post

I just came back from the NJ state championship (for pictures see Mike Goeller or Jim West's sites), and there was a fearsome Kenilworth presence there.  Ziggy, Mike Wojcio, Greg Tomkovich, Lou Sturniolo, and Steve Stoyko were some of the participants, along with several spectators from the club.  Meanwhile, Joe Renna, myself, and Yaacov Norowitz all went into the last round sitting on 4.0/5 and with 1st place up for grabs in our sections.
Massive kudos to Joe Renna who cooly converted his last game to get to 5/6 and 1st place in the U1300 section (which I expect will be his last U1300 event ever).
A lukewarm handshake for me, when needing a win the best I could come up with was a draw for 4.5/6 and 3rd place in the U1900 section (hopefully my last U1900 event ever) and some cold cash for gas money.  On the plus side I finished undefeated, on the minus side I did my Peter Leko thing with +3 -0 =3.
Scorn shall be heaped upon Yaacov, who had the NJ title in his hands with a soft last round matchup against IM Dean Ippolito but walked away emptyhanded, having experienced the passed pawn's lust to expand firsthand.
One more highlight you can only get from this reporter - a wild freaky pawn endgame that took place on board 3 in the U1900 section in the last round, with $400 sitting on the line.  To be continued....
posted by Ian  # 5:36 PM 0 Comments Links to this post

A couple of puzzles to warm up the useless organ between your ears...
From this position (White to move), mate Black....with only one move from your rook (as many was you want with the king of course) 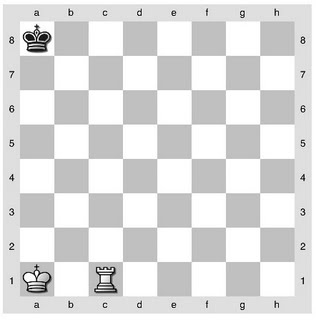 Too easy?  Try to win here as White, Black to move.  Be careful not to walk into a trap. 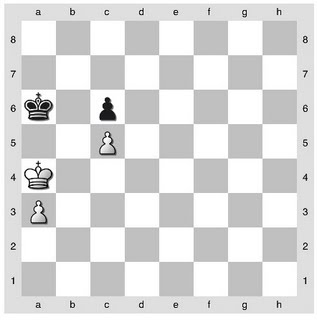