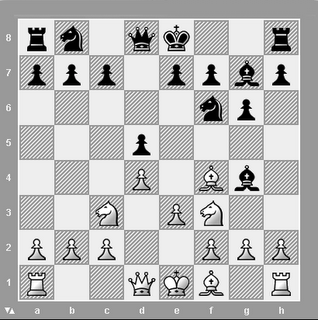 Barry Attack, after 5...Bg4!
There is a good piece today in the Spanish language InforChess titled "Teoría de Aperturas: Una jugada en el ataque Barry" by Jorge Luís Fernández that covers one of Black's better defenses against the Barry Attack: 1.d4 Nf6 2.Nf3 g6 3.Nc3 (no King's Indian's allowed!) 3...d5 (unless you play the Pirc, this makes the most sense) 4.Bf4 Bg7 5.e3 Bg4! (first played in Lasker - Reti, Rotterdam 1923). This line was also recommended by IM Andrew Martin in an archived piece titled "Dodgy Games with Dodgy Names" (which I mention in a bibliography on the line), but Martin recommended meeting 6.Qd3!? (threatening Qb5+) with 6...c6 rather than Fernández's interesting 6...O-O!? 7.Ne5 Be6! Both seem fine.

It's important to note that White can also play the so-called Tarzan Attack with 5.Qd2!? which sidesteps the Bishop pin and threatens Bh6 at some point. Arthur Kogan has had success with this line and writes about it in SOS. But there is good discussion at the ChessPub forum suggesting that some of Kogan's analysis does not hold up and the classic game Yusupov - Kasparov, Belfort 1988 is still good theory.

Now I just have to figure out how to beat the Trompowsky, the Versesov, the Blackmar Diemer, and a bunch of other crap.