From an Open Ruy Lopez we arrive at the following position with White to move.  As Nigel Short might say, 'Black is getting stuffed', being squeezed for space and with seemingly no good place to put his queen.  Black comes up with an interesting idea to exchange queens and even arrive at a better endgame, all starting with an inaccuracy from White... 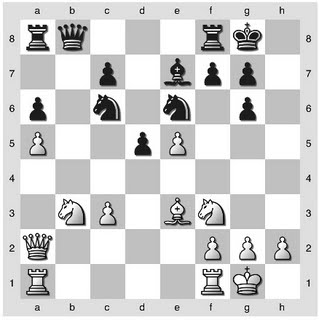 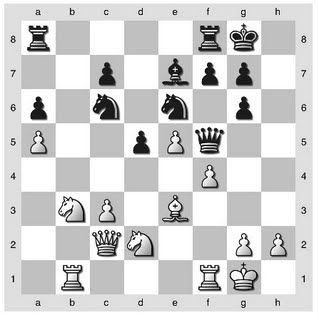 A remarkable journey by Black's queen over the last four moves establishes equality - it took real imagination by Szabo to solve the problem of his queen on b8 to put it via b5, c4, and g4 to f5...just to trade it off! 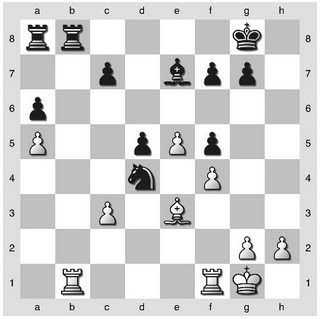 Amazing, but apparently true.  Although to my first impression (and my computer's) having the bishop locked up by another pawn is the worse choice, this is not borne out by examination.  Here's the analysis position Bronstein describes as lost for White: 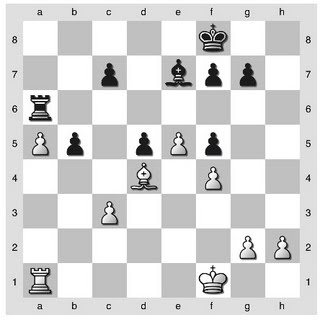 Oddly enough White has no plan to improve his standing - if the king tries to support a kingside pawn push and wanders away from the queenside, Black can just push ...b4 at will because cxb4 Bxb4 loses the a-pawn, and ...c5 is coming as well, creating a protected passed pawn.  Even with the White king on the queenside the plan is the same just slower - White has no way to push through a pawn of his own.  So Gligoric's 28. cxd4 is correct, although the reason is not obvious.

Using threats to the a-pawn Black achieved the exchange of rooks and finally won the forlorn a-pawn and is left with an endgame where his bishop is monumentally better and he has an extra outside passed pawn....and indeed White resigned in a further few moves.  (Despite the impressive-looking e5 pawn, Black can play an eventual ...f6 and fxe after which he can overload the defending White bishop from either the d- or f-pawn depending on which is remaining by a ...d4 or ...f4 pawn sacrifice and mop up the White pawns with his bishop). 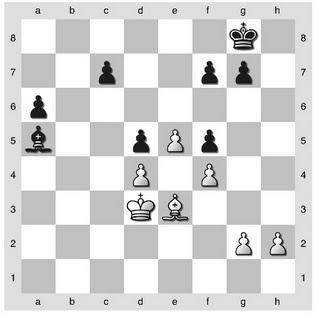 Yet all is not lost!  Bronstein found the saving: 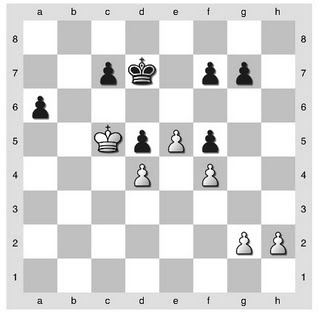 As a draw (!).  Once again, an example of a hidden resource...never give up looking for them!   (This is also why 34.... Rb5 was better - this continuation would not have been possible.)

PS   See Mike Goeller's comment to the post below about where you can play through all of these games for free on chessgames.com.

The candidates tournament of 1953 in Zurich to choose a challenger against Botvinnik was brilliantly annotated in a bookshelf-busting 350 page book by David Bronstein.  He was one of the participants in the 30-round (!) double round robin of 15 of the top players in the world at that time, including former world champion Euwe and future world champions Petrosian and Smyslov, along with three of the greatest also-rans of all time: Bronstein, Keres and Reshevsky.   The genius of the writing in Bronstein's 1st (and only?) chess book is that the key plans for each side are detailed in a verbal style that can be understood without having a board in front of you, i.e. pointing out that the key to the position is a certain weak square, and that the next 10 otherwise incomprehensible maneuvers are each side's effort to control it.  Many GM's have called it their favorite book of all time. Best of all, it's still in print and costs $10.17 at Amazon (I got it for $9 at a sale at the USATE last year), so no excuses, you should really own this.

Not convinced yet?  Over the next several weeks I'll post my top 20 favorite moments from the tournament (if 20 seems like a lot there were 210 games so I was actually trying to be very selective).    Starting with.... 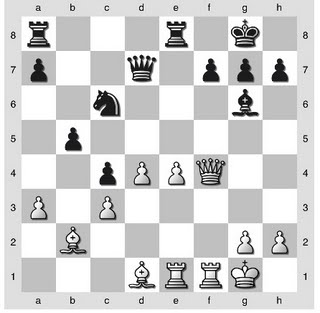 It's Black to move in this Nimzo-Indian middlegame, and it looks to me like Black has reason to panic - White has a simple plan of organizing a center pawn push which will activate his bishops and enhance his kingside threats.  Petrosian prepares to counter by organizing his heavy pieces in the middle.... 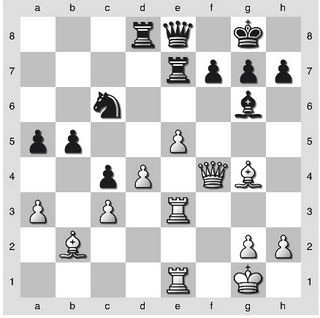 With the growing threat of e6 to follow, forcing ...f6 as the first of possibly many future defensive concessions.  But looking back over the last few moves it's easy to see in retrospect Black was planning...

Bronstein: Black must stop White's pawns, so Petrosian gives up the exchange at a spot of his own choosing, freeing e7 for the transfer of his knight to d5 [Centralization!  Blockade! -IM].  Of course, Black gets good compensation for the exchange: his knight is much stronger on d5, as is his bishop, which no longer has an opponent.

Kasparov: ...let us ponder over the position and ask ourselves: why, in fact, should a rook be stronger than a minor piece here?  After all, a rook requires open lines, it needs something to attack, whereas minor  pieces require strong points and pawn support.  In the given instance there is a shortage of open line, and it is no longer possible to stop the knight from reaching d5, where it will be impregnable.  In addition, from d5 the knight will be attacking the c3 pawn, and if the white bishop does not manage to switch to d2, it will remain 'vegetating' at b2.  It is practically impossible to break Black's light-square defences: White simply does not have resources to do so.

Amazing!  Yet so simple when explained....except that this exchange sacrifice

is complicated by the fact that the position is not fully closed (compare this with game #2 below) - there is potential for an opening in the queenside, and this is what Reshevsky first tries for and what Petrosian had to anticipate - if the queenside is opened it is likely that White may still be able to win. 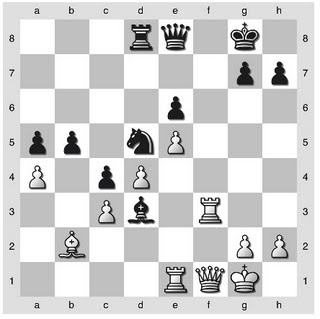 And here, Reshevsky returned the exchange with Rxd3, after which the game was soon drawn.  An exciting game, and a defensive triumph.

In the next round, Reshevsky had the Black side of the Nimzo-Indian.  Was he inspired by the game above?  You be the judge... 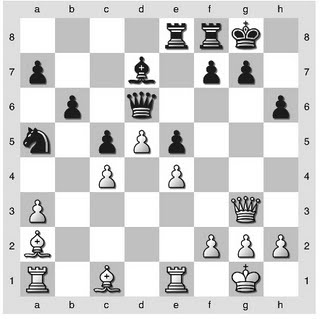 Bronstein: How is Black to meet the impending attack on his king?  He must ready himself to weather the storm by placing his pawns on the dark squares, his rooks on the e-file and his knight at d6 where it blockades the pawn and covers the light squares.

And so he does...but to do this requires forseeing an exchange sacrifice.

Bronstein: Black shores up e5 with might and main, pressing simultaneously on e4 with the hopes of inducing f4-f5. 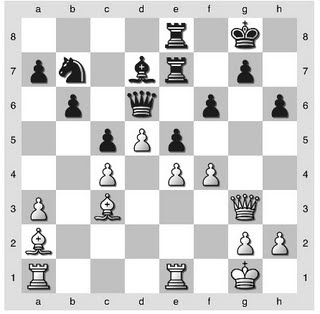 What is this??  Averbakh consents to closing the position, which appears to ease Black's defense (the game was drawn in a further 8 moves).  After all (as Bronstein points out) 25. fxe5 fxe5  26. Rf1 followed by doubling of the rooks on the f-file gives White the advantage, since a Black rook will be tied to the weak e5-pawn.  The key lies in the improvement for Black - 25.  fxe5  Rxe5!, when after Bxe5 Qxe5 "the black knight which would enter d6 would be not a bit weaker than a white rook." (Bronstein)

Another exchange sacrifice!  One that didn't appear on the board and yet one that determined the course of the game.  All the same, this sacrifice, if it occurred, is a simpler case than the Petrosian example because here there is little prospect of open play anywhere on the board after the sacrifice.

I wish I had saved the position, but a week after reading this I pulled off this exact sacrifice (rook on e5 for the dark-squared bishop) against a computer in the Nimzo-Indian, and the surprised machine shuffled its pieces for the next 50 moves until it called a draw.  A good trick to know.

Random question if anyone knows - did someone put out a book on a Sicilian repertoire based on 1.e4 c5 2. Bc4?  I'm seeing that a lot in the last 2 or 3 months after never seeing it before.  It seems like a really limp Sicilian for White, so it would be strange if someone were making money off of a book on this.

The following was one of my games from the National Chess Congress last month. See what happens when one goes pawn grabbing.

I am testing out some different ways to display the games. Hopefully, I will have some entertaining games while doing this. Next one perhaps...Ian vs Don!

For all you web jockeys here's my top 5 free resources for chess on the net:
1) www.chessgames.com
Where your day should start, with a problem of the day featured prominently on the front page.  Want more?  There's a database of historical games populated by users (you can even add your own games though they ask that at least one master-level player be involved), and an openings database that is my first reference point.  Also there are live broadcasts of high-profile games with kibitizing that is somehwere between 100-1000x more intelligent than what you'll get off ICC users.  To get some of the better features requires $25/year, though.
2) www.chess.com
Too cheap to shell out for ICC?  Chess.com features free online chess, both blitz and correspondence.  The server's a little choppier than ICC, but hey it's free so no complaining.   Really a killer value, could bump up to #1 on my list someday.  They've got other stuff (video lectures, etc) that costs $$, but there's no need for that.
3) www.chessbase.com
The best place to keep track of news from around the world of chess, com
plete with picture reports which for some reason tend to focus on pictures of the ladies of chess (whoever they may be).  Good analysis, and 100% free of charge.
4) vbhat.wordpress.com
The blog of American GM Vinay Bhat.  Kinda like this blog with analysis of his own games, except he's waaaay better than me, plays more ches
s, analyses more and analyses better.  If you want a free insight into the mind of a GM, look no further.
5) www.chesstempo.com
A free tactical puzzle database that keeps track of your results and even assigns you a rating reflecting your progress.  No need for puzzle books anymore, it's all right here.
I'll be in Hawaii for the rest of the month, see you at the club championship (PS Vote to make it rated in 2010!) 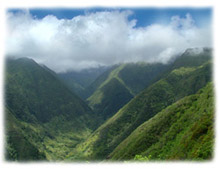 Fear and Loathing in Kenilworth

We were somewhere around Barstow, on the edge of the desert, when the drugs began to take hold.
The Karpovs tasted the unfamiliar sting of defeat this past week in the GSCL, aided in no part by my loss on Board 2.  It was an up and down maneuvering game which soon reached the following position.... 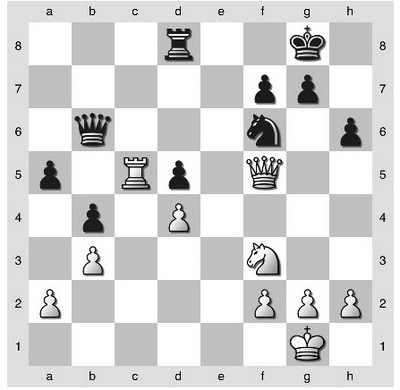 Here I was Black, and I was spending much of my precious remaining time trying to figure out how to break the paralysis of my pieces - the Queen is needed to defend the Q-side pawns, the rook is currently pegged to the back rank, and White can improve his position before taking any action.  So I decided on 36....Ne4!?  which proposes to solve all these problems at once.  After the game continuation  37. Rxd5 Rxd5  38. Qxd5 Nc3 white then chose 39. Qc5... 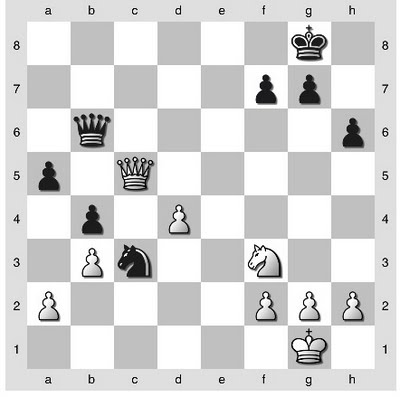 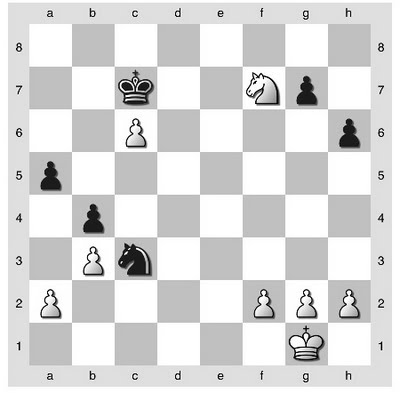 Where Black  is even better here, with the potential to quickly grab the White Q-side pawns.  This does not represent White's best continuation in an admittedly complex endgame, but the points I should have focused on in my time pressure are: 1) The king has time to stop the passer  2)  This will be incredibly easier without queens on the board 3) both White pawns are vulnerable because of the ...Nxa2-c1-b3 maneuver  4) Black's advanced pawns on the Q-side represent his only threats.    Based on this it would have been an easier decision to go this endgame.  Alas. 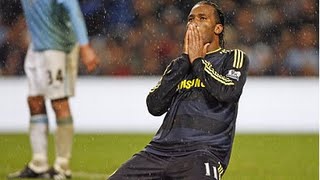